Publiziert am 6. Januar 2023 von GKS
Registration is now open! Please use this form to register and make your booking at the conference hotel by January 31.

Registration is now open! Please use this form to register and make your booking at the conference hotel by January 31. 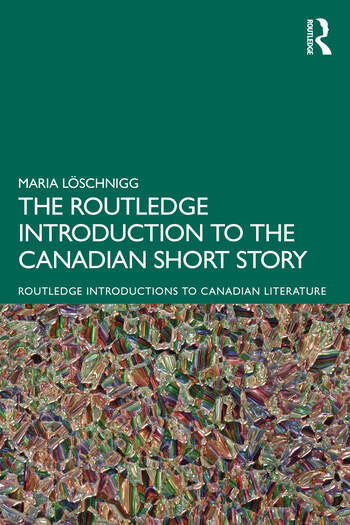 This volume aims to introduce undergraduates, graduates, and general readers to the diversity and richness of Canadian short story writing and to the narrative potential of short fiction in general. Addressing a wide spectrum of forms and themes, the book will familiarise readers with the development and cultural significance of Canadian short fiction from the early 19th century to the present. A strong focus will be on the rich reservoir of short fiction produced in the past four decades and the way in which it has responded to the anxieties and crises of our time. Drawing on current critical debates, each chapter will highlight the interrelations between Canadian short fiction and historical and socio-cultural developments. Case studies will zoom in on specific thematic or aesthetic issues in an exemplary manner. The Routledge Introduction to the Canadian Short Story will provide an accessible and comprehensive overview ideal for students and general readers interested in the multifaceted and thriving medium of the short story in Canada.

Call for Submissions for a Workshop and Essay Collection: Literary Property in America: Claims, Creativity, Copyright

Across numerous disciplines, scholars continue to grapple with property as a central organizing feature of North American culture, past and present. Definitions of property thus range from ownership over tangible as well as intangible objects and proprietary rights to understanding property as a holistic system that shapes an array of social, cultural, and economic relations. Such a system is subject to the law. However, literature has been instrumental in (re)shaping legal conceptions of property while simultaneously constituting an intangible form of property itself. Literary forms such as the antebellum slave narrative, for instance, were key in abolishing property regimes of enslavement. And over the course of the long nineteenth century, American writers and publishers were mobilizing new politics of authorship to claim creative labor as “literary property” by law.

As members of the Collaborative Research Center “Law and Literature,” we adopt and adapt the term “literary property” to investigate historical and contemporary dynamics between property and literature. When, where, and how does literature become recognized as property––and by whom? How do different strands of literature aesthetically and politically engage with questions of ownership? How are competing notions of creativity—as individual or collective cultural property––negotiated in legal discourses and larger public debates? Under what circumstances is copyright understood as protection, property, or as complicit with exploitative, oppressive structures?

We scrutinize these questions in an interdisciplinary workshop, taking place in person at Osnabrück University on May 12–May 13, 2023, where we offer invited input and discuss all submitted essays. We plan on submitting the finalized contributions as an essay collection to De Gruyter’s Law & Literature series. The essay collection will be edited by Cedric Essi, Fenja Heisig and Debora Stanca and published in 2023.

While we are particularly interested in the general concept of literary property in America, we welcome theoretical contributions as well as transnational approaches to property from a variety of disciplines, methodological angles, and historical time frames.

Contributions can focus on but are not limited to the following questions:

To apply for the workshop and publication, please send an abstract of 300 words, double-spaced, along with a one-page CV in one pdf to literaryproperty2023@gmail.com by January 30, 2023. The abstract should outline your plans for a full-length article, to be discussed in the workshop. You will receive a response within two weeks. Full manuscripts of 6000-7000 words will be due on May 1, 2023. We provide and cover accommodation for all participants. We will also offer travel grants (dependent on distance and location). A limited number of travel grants are available. To apply for a travel grant, please include a short explanation (2–3 sentences) at the end of your statement of purpose. All applicants are strongly encouraged to seek funding from their home institutions.

CFP special issue of AmLit: “Potentials of Positionality and/or Ethics of Exclusion?: Critical Reading Approaches to Minority Literatures from the Americas”

Since the Civil Rights movements in the U.S. on behalf of BIPOC, women, 2SLGBTQQIA+
people, and people with disabilities, research in literatures by members of these minorities is thriving. On the one hand, researchers from within marginalized communities within academia but also allies have contributed unique insights by reflecting their both scholarly and personal positionalities. For example, Hartmut Lutz, Florentine Strzelczyk, and Renae Watchman (Navajo) begin their volume Indianthusiasm: Indigenous Responses (2020) “[b]y locating ourselves within kinship, our family relationships, our backgrounds […]” in order to “[…] reveal our intent as researchers, our relationship to the project, and our responsibility as researchers who seek to work with Indigenous researchers” (7; comment added). Without such self-reflexivity, researchers from outside the communities of the authors they study face ethical challenges regarding the theories they apply. In addition, the outcomes of research may not reflect the intentions of the researchers due to limited approaches, as Eve Tuck (Unangax) and K. Wayne Yang state that “[…] the academy as an apparatus of settler colonial knowledge already domesticates, denies, and dominates other forms of knowledge” (235). The latter issue should especially concern literary scholars from Europe who belong to the mainstream of their societies but whose work participates in global discourses on inequalities resulting from Eurocentric colonialism. Yet, writing about their institutional contexts in Canada, Watchman, Carrie Smith, and Markus Stock advocate that, for example, “[…] Indigenous and German Studies can be bridged (and relations built) by reflecting critically on their mutual influences and definitions of each other” (318). Building such connections could appeal to scholars worldwide whose engagement with minority cultures invites comparisons to their own contexts while being grounded in identity politics. For example, as a Pakistani-American, Asad Haider writes about how the autobiography of the founder of the Black Panther Party, Huey P. Newton “[…] set for me a model of the life of the mind that was far more convincing than the bohemian hedonism of Henry Miller or the self-serving social climbing expected of members of a ‘model minority’” (“Introduction”). With an interest in such transcultural approaches, this journal issue aims to center concepts of universality and particularity insofar as they are reflected by minority literatures and as they can inform critical readings. This special issue follows a broad definition of “literature” to include figurative narratives with aesthetics referencing their genres and modes of production. The focus aims to supplement decolonial concerns by allowing contributors to trace overlaps between contexts.

Possible submissions may include (but are not limited to):
• Essays on minority literatures between scholarship and activism
• Essays reflecting on fictionality as performances to address (non-) minority readers
• Essays discussing non-fictional texts that foster personal identification with minority
issues
• Essays juxtaposing graphic elements in literary texts with extra-textual stereotypes of
minorities
• Book reviews of literary studies approaches in terms of their attention (or lack thereof) to
minority positionalities

Please send your proposals for contributions to positionalityspecialissue@gmail.com by March 30th, 2023. Proposals must include contact information, an abstract of 250-300 words, a bio note of 200 words, and 5-7 keywords. Notifications of acceptance or rejection will be sent out by the end of April 2023. If accepted, please submit your original contribution of 5000-10000 words, including notes and bibliography by September 30th, 2023. With regard to formatting and MLA citation style, please consult the following links:
https://amlit.eu/index.php/amlit/about/submissions and
https://amlit.eu/public/journal/1/__A_Instructions_for_Contributors_Update_June_2022.pdf

This special issue invites submissions on the ways Canadian dramatists, scholars, theatre and performing arts practitioners, and audiences are engaging with the changing, and sometimes unstable, social and cultural landscapes of our time. Theatre, and the performing arts in general, respond to and reflect the socio-cultural conditions from which they emerge. How are concepts of performance and performativity adapting to reflect changing notions of identity and selfhood? How do theatrical representations respond to anxieties and traumas emerging from unstable political contexts? How do the performing arts attempt to de-colonize inherited narratives, systemic prejudices, and fraught social inequities? In this issue, we consider how theatre – and the performing arts generally – are responding to the challenges of an unstable sociopolitical landscape. These fraught conditions include, but are not limited to, the climate crisis, the pandemic, racialized oppressions, distrust of sources of information (fake news), technological changes, gender biases, and human rights inequities. In what ways has the inherently social and collective nature of theatre been used to forge new forms of community, sometimes by exploiting technological innovations? How have these developments found new ways to engage and inscribe audiences within emerging collective visions, sometimes by mobilizing a positive sense of community in the face of these pressures? What roles did online theatrical projects play in responding to the isolating effects of the pandemic?